I decided to join my parents and my brother and ours kids on the weekend trip because the resort is supposed to be closing after Labor Day due to lack of self sustaining level. It’s out in the middle of nowhere in a dry desert two hours from where we live.

They left Friday night and I left the next morning after 8 and didn’t get there until right before noon.

The stupid thing I did was I didn’t change before I left so I felt a damp spot on my sundress so I had to find a place to stop. I decided to stop in a small town on the wall at a gas station but the lot of was so small it could only fit four parked cars. I parked and then I realized that wasn’t a parking spot I was in so I had to get back in my car and back out and park in a real parking spot. Then I went inside and changed and stuck it inside a plastic bag and threw it away.

Then I left again and it took me two music CDs to get there. Once I got there, I tried to meet my family at the RV but no one was there so I took my stuff to the pool. I saw my brother there who was going to go minature golfing with his son and I got in for “free” because I was a guest there than a visitor. I went in the locker room to change and I put my diaper in my packpack that was slightly used but it still looked unused. I wore my trufit underwear and put my suit on and went out to the pool and met with my family and put my stuff with their stuff. It was crowded there so I only went down the water slide once because I was cold standing out of the pool even though it was 100 degrees out. My mom made a comment about my underwear and said I looked goofy. All it did was it absorbed water and when I peed once, I had pee dripping down my leg but no one noticed because it looked like water dripping. I stayed in the pool until I got chilled and I would go in the hot tub and then dry off. Then after I got done swimming, I took my suit and tru fit off and I saw the back exploded but the underwear kept it all contained and I tossed the pad in the sanitary napkin holder. Then I dried off again and put my diaper back on and my dress. I had to tape the side with mailing tape because the bottom right tab got stuck. I brought mailing tape along thank god. Then right after I left with my son and nephew, an announcement came on that everyone had to get out of the pool due to an incident. I found out the next day it was because there was poop in the pool. My mom didn’t know the details, she over heard someone say “Everyone they kick everyone out of the pool and shut it all down is because someone pooped in the pool.” I told her that just sounded like an assumption. Thanks god it wasn’t me who shut it down. Then we headed back to the RV and the kids played outside and we all ate lunch and we all air dried the towels and swimsuits.

It was so hot out, the AC couldn’t even keep the RV cool and the freezer couldn’t keep the stuff frozen inside it so the ice cream was all soft and so where the Popsicle. It did start to cool down around 5 so the RV started to cool down as well and me and my son went for a walk and I then went back to my car and put a clean diaper in my purse for the following day and went back to the RV.

I kept the diapers in the trunk of my car and didn’t bring the whole pack with. My brother got a car pass for me because when you reserve a RV spot, it also includes one car and I came with the car so I didn’t need to pay anything. It came in handy for my dad and my brother because they both used it to go to a nearby small town to get some stuff like beer.

The next morning I changed in the bathroom and put my diaper in another plastic bag and put it on top of the waste basket. I also got dressed and brushed my teeth then right after I was done, the door opened and it was my son. Wow, so close and I said “hey” and he said he had to go potty. I was done in there anyway so I left the bathroom and he used it. We all had breakfast and my son and my nephews played outside and then we all went miniature golfing with my brother and then swimming again and I had to put my diaper in my purse and I carried my clothes out to the pool and put them on the table with the other stuff from my family. My mom had my daughter and she brought her to the pool. I went down the water slides more this time since it wasn’t crowded and the water felt much warmer because it wasn’t too out out yet to make the water feel cold. My kids went down the kiddy slide again and I mostly played with my daughter in the pool since my son was too busy playing with his cousins. Then they all got bored in the pool. Mt brother had already left to take his tent down and my dad left to get packing because the RV had to be out of that spot by 11 AM. I walked my nephew and daughter back to the RV and he joined with his dad to shower and I took my daughter to shower but I had to take a trip to my car to get my bag and the stroller since she was complaining she was tired. I rarely use that thing now because I prefer her to walk but she is 4 so she can’t walk too long like the rest of us and gets tired. Hey I still rode in one at that age when we did lot of waking.

So I only used two diapers over the weekend and I kept it well hidden and I noticed everyone else was leaving that day because everyone was packing up and going home and we left at noon after we had lunch in the RV in the gravel lot.

I did get a little sunburned and I went for a little walk this morning before we started our day when it was still cool out. Then it started to get hot around 9 am. I also heard when I got there that they might not shut the resort down after all because some guy wants to get it financed to update the place. I even saw it online too on my mobile phone when I looked. The place looks too nice to shut it down and the fact they have built new structures there and it would be all that work for nothing. I also found out my family had been coming here about every summer and I didn’t realize it. But I am glad I joined this year. I have a car, I can drive out there for the weekend. Just leave early in the morning. And I only used 1/4 of tank of gas total. That includes my brother and dad using it.

My diaper was smelling badly of piss so I needed to change it. It smelled like the combination of menstrual blood and urine. The way my pads would always smell when I wore them on my period. I asked my husband if he wanted to change me and I got my stuff from upstairs. ABDL problems here, I could not be changed in my room because our son was sleeping in there. I brought a diaper and wipes and rash cream and my pajamas pants downstairs and I was expecting to go into the basement but no, he told me to lay on the floor in the living room. I told him I didn’t want his parents to see if they come out and he said they were sleeping. I told him I would be so mad if they wake up. He reassured me they were sleeping hard because they were snoring in the other room. He took my sundress off while I unzipped it and I laid on the floor. He ripped the diaper off literally and cleaned me up and put rash cream on and he rubbed my pussy. Then he put the clean diaper on me and put my pants on. No one came downstairs and no one woke up. I threw the diaper away in the living room trash can and tied the bag up for me to take out later. I also brought my stuff back up to my room and grabbed my robe and put it on. 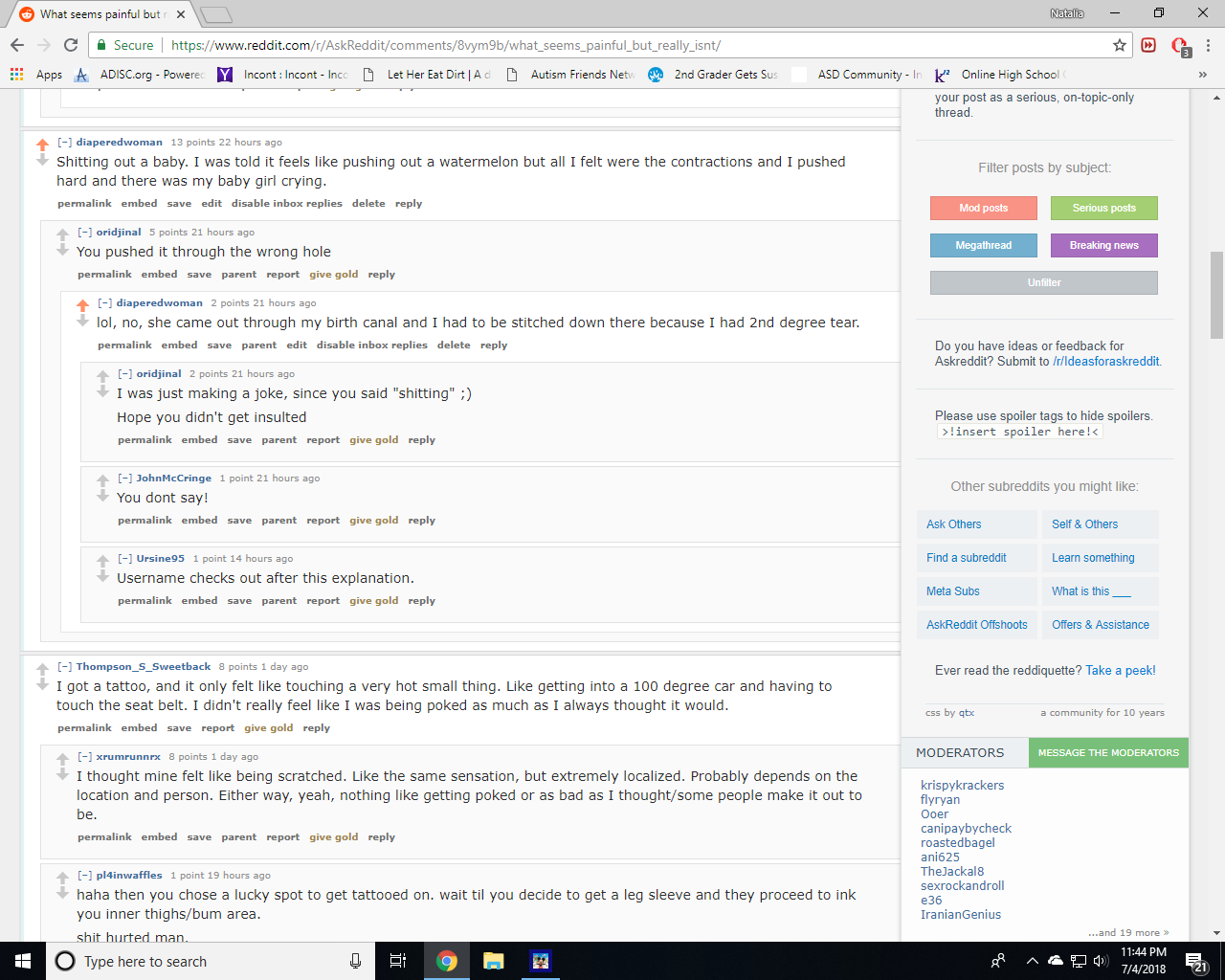 I know many non-ABDL people would probably think using adult diapers is gross. I have encountered several on the internet saying just that. Relative to the stuff those “normal” people do, though, wearing and using diapers isn’t gross.

I can remember a conversation between my mother and I. She told me she bets if diapers were normal, people would probably think she is the gross because of the thought of holding it and relieving it somewhere. I thought that would be an interesting story but then I saw someone had already written it and posted it at ADISC.

I have cleaned restrooms as part of my job and some of them are gross, mostly the mens’, and I can’t count how many times I have seen urine on toilet seats and dried up vomit around the bowl. When I volunteered at work to clean college dorms at the downtown university, I could tell some of the toilets had never been cleaned all year because they were all covered in dust and dirty. The dust was black.

Any thing that is the majority is “normal.” Lot of people will agree public restrooms are gross and some women are squatters when they use the toilets, some just hold it and wait until they are home to go. I have never been crazy about using toilets but I did used to avoid toilets with pee spots on them or if they were not flushed. Then I started to grab some toilet paper and wipe the seat before sitting. I would even flush the toilet before even using it. Now I don’t have to think about that stuff anymore.

Learning to understand my aberrant self. Working through my “big three” with the main discussion around #abdl in my personal, professional, and family life.