This was my favorite holiday when I was a kid because I loved collecting candy from neighbors and every year I would try to get the most and try and hit every house and even go to the neighborhood below us. I think there was only two times when I was able to hit every house with lights on without getting tired and only that one year where I hit the other neighborhood which was only one block long. But when we lived in Montana, I never hit every house because I would get too tired and cold and having a bag full of candy was enough for me to feel satisfied to quit.

Then I got too old so when I was 17, that was my last year of trick or treating. Now I get to take my kids and this year was a nice day and it was in the 60’s again so it was a dry night and I was expecting it to not be cold but boy was I wrong. I went as a little girl as pictured on my Twitter page. It turned my husband on because I looked like a baby girl. My son thought I looked silly and told me only kids wear pigtails and not adults. I stayed in the outfit for the rest of the day and wore the bottoms to cover my diaper.
I had to go online to look at best neighborhoods to go trick or treating in because where we live, there are never any trick or treaters and none ever come to our house. So I found a neighborhood to take my kids to and I drove them there and parked and we did two blocks and they filled their pumpkin buckets up with candy. I got tired and I got cold so my feet were freezing. My daughter got tired too so I decided to call it quits and we only did two blocks but we did it for nearly two hours and that is not going to the same houses again. There were a lot of trick or treaters so I decided we will do this area again next year.

My son felt his sister ruined trick or Treating for him so I told him he had plenty of candy and I am tired and cold and ready to go home and it’s close to their bed time and we have more candy at home. I looked at the temperature on my dashboard and saw it was only 55 degrees out. What? It felt colder than that, damn humidity. I swore it felt like it was in the forties or thirties. My son wasn’t cold because he felt hot. I noticed lot of the kids were not wearing any jackets or sweaters. I was wearing my Barbie coat to help keep warm I’ve had since high school.

I also noticed I was the only grown up that was dressed up for Halloween other than the adults who were handing out candy. But I didn’t see any parents dressed up for Halloween but they also waited on the side walk like I did while our kids got candy. I only got candy when someone would leave their bowl of candy out so I had a few pieces plus the mini bag of M&Ms I found on the ground.

Here is my photo again since I know this will be buried on my Twitter page soon: 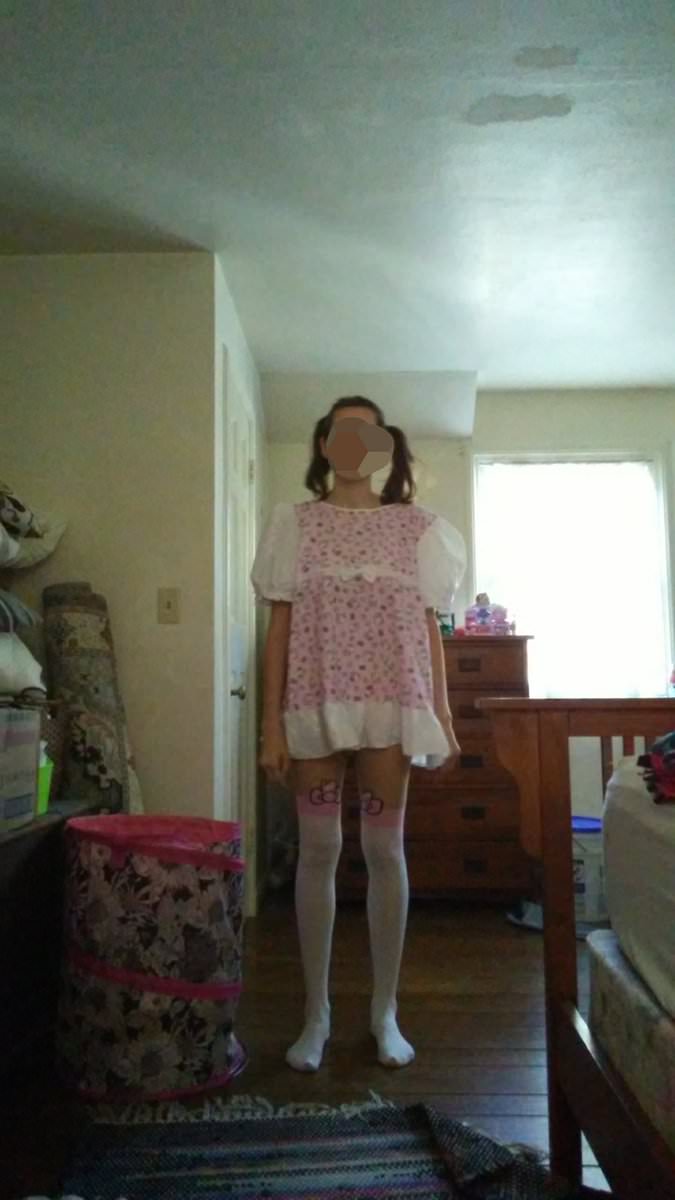 Then we when got home, I put the kids to bed and my husband had blue balls all evening while we were gone because of my “costume” so he fucked me in my bed that night and we put a chair in front of my bedroom door for in case our son tries to come in. he took off my bottoms and my pantyhose and my diaper and cleaned me up and fucked me and then he took off my dress and took out my pigtails and I took my shower and then he put a clean diaper on me and picked out a pair of pajamas to put on me which was just my regular pajamas. Just Hello Kitty bottoms and a mismatched top with two random numbers on it.

Learning to understand my aberrant self. Working through my “big three” with the main discussion around #abdl in my personal, professional, and family life.